The District's democratic inequality has negative impact beyond its residents not having congressional representation. The constitution grants Congress full authority over the federal district including the local budget, and all local laws. This kind of oversight may have been necessary in 1801, but it is now outdated and no longer required. Unfortunately, many members of Congress use this constitutional authority to exploit the District or use it for personal political gain. When certain members of Congress step in and overrule decisions by local elected leaders and voters, it not only undermines the fundamental principles of democracy but disregards the critical needs and priorities of Washingtonians.

DC Vote is working vigorously to change this oversight arrangement.

57 Groups Stand Up for DC Autonomy

In July of 2017, DC Vote joined with 56 other national, regional and local organizations in a letter to Congress. The letter lays clear that District residents deserve the right to self-governance and that more and more Americans are bothered by their Representatives messing the local affairs. Read the Letter Here.

2016 saw 25 different attempts by Members of Congress to overturn, overrule or change local Washington DC laws.  DC Vote will continue to work with allies across DC and with Rep. Eleanor Holmes Norton to ensure that District Residents are able to self-govern.  More Information. 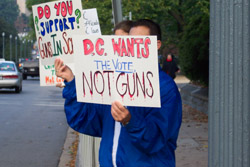 Certain members of Congress have for years pushed legislation to eviscerate the District’s gun laws. These assaults have continued despite a federal court ruling that the District’s laws comply with the Supreme Court’s 2008 District of Columbia v. Heller decision. In 2014, the House of Representatives attempted a spending bill provision that would have overturned all of the District's’s local gun laws.

From 1999 to 2007, Congress blocked the District from using locally-raised tax dollars for syringe access  (needle exchange) programs proven to reduce the spread of HIV/AIDS among intravenous drug users. The ban occurred at a time when HIV/AIDS exceeded epidemic proportions in the District. Since the ban has been lifted, syringe access programs have been implemented and expanded in the District resulting in many lives saved. In 2015, DC health officials even report a 60% drop in the number of newly diagnosed HIV/AIDS cases from injection drug use.

In 1998, two weeks before 69 percent of District voters approved a ballot initiative to legalize medical marijuana, Rep. Bob Barr (R-GA) added an amendment/rider to the District's appropriations bill blocking the local government from using local funds to count or certify the vote. Later, Congress went on to ban local funding of a medical marijuana program. It took until 2010 for the District to get the ban lifted so the Council could implement the law.

During the 2014 election, nearly 70 percent of DC voters supported a ballot measure to legalize possession of small amounts of marijuana. Rep. Andy Harris (R-MD) moved a rider on a major spending bill to overturn the vote. Harris has also attempted to dismantle the District’s medical marijuana program. While District leaders fought to ensure legalization took effect, language blocking the local government from implementing a tax and regulate system passed both Houses and was signed by President Obama.

Starting in 1988 Congress annualy passed legislation to prevent the District (but no state) from using locally-raised tax dollars to cover abortion services through Medicaid. In 2009 this restriction was lifted, but Congress reintroduced the ban in the FY 2011 Continuing Resolution. The ban remains in place, despite two attempts by allies of the District to remove the prohibition.

Also in 2011, the House of Representatives passed the “No Taxpayer Funding for Abortion Act” (H.R. 3), which would have made the District's ban permanent and, thus would have permanently overridden the intended autonomy afforded the District by the Home Rule Act.