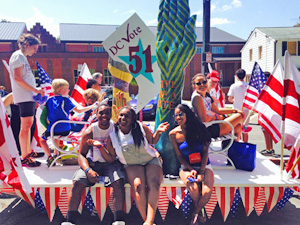 The District of Columbia is home to more than 660,000 U.S. citizens who pay federal taxes, serve on juries, fight and die in U.S. wars, and observe all obligations expected of other Americans. What distinguishes the residents, however, is the fact that they are denied the fundamental right to vote in the national legislature where key decisions are made.

Having no voting representation in Congress means District residents are ruled by the legal and foreign policy decisions of elected officials from other states. Moreover, the local laws and local budgets are subject to congressional oversight and can be modified or rejected as a matter of course. On a routine basis, members of Congress use the federal power vested in them by voters from other parts of the country to impose legislation and policy, as well as undermine local elections and public policy decisions made by local elected officials.

Creating a new state in order to grant democratic equality to the 660,000 residents can be achieved through the passage of a single piece of legislation. The new state would provide equal rights and remove the current unjust blight on our democracy.

The District’s residents currently fulfill all duties - including military service and tax obligations - as other citizens, but are denied a voice in the democratic process. A new state would extend the same equal rights that all other Americans enjoy.

The New Columbia Admission Act (HR 317/S 1688) would shrink the current 'federal district' to include the White House, Congressional offices, most federal agencies, and the National Mall while transforming the residential portion into a new state that would provide full Congressional representation and democratic equality.

Contact your Representative and Senator and tell them to co-sponsor the New Columbia Admsission Act today. 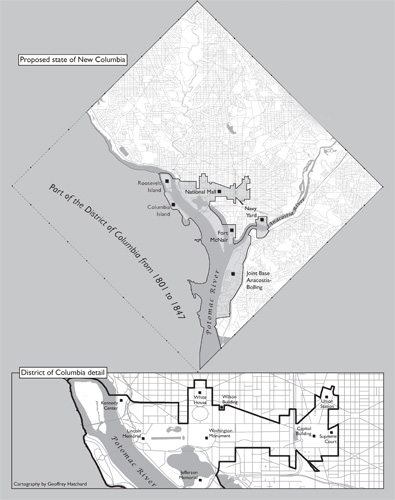 IS CREATING A NEW STATE CONSTITUTIONAL?

The current legislation includes two parts, both of which have precedent in American law without alteration to the U.S. Constitution:

To ensure constitutional compliance, the statehood legislation calls for the simultaneous repeal of the 23rd amendment to the Constitution. Ratified in 1961, the amendment gave District residents a vote for President and Vice President for the first time, albeit without proportional representation in the Electoral College.

HOW DO OTHER DEMOCRACIES TREAT CITIZENS WHO LIVE IN THEIR CAPITAL CITIES?

The United States is the only democratic country in the world where the citizens of the capital city do not have full voting representation in the national legislature.

The United Nations’ Human Rights Committee cites the District’s lack of democratic equality as a violation of the International Covenant on Civil and Political Rights, a treaty to which the United States has been a signatory since 1977.

WOULD CREATING A NEW STATE GIVE CITIZENS TOO MUCH LEVERAGE OVER THE FEDERAL GOVERNMENT?

No. Making creating a new state would give District residents equal, not special, rights.

The 18th century notion that the U.S. capitol should not be in any one state out of concern citizens of that state would have undue influence is outdated and irrelevant. Modern communication and transportation mean residents and leaders of any state have nearly immediate access to their members of Congress and to the executive branch. Furthermore, one reason for creating a “neutral” capital city was the 18th century concern that a state would not come to the defense of Congress in the event of insurrection or violent protest. Those security-related concerns are no longer relevant from the perspective of state/federal relations.

If physical proximity to the capitol created a beneficial political environment, District residents would not be constantly subject to negative Congressional interference in local affairs.

WOULD THE NEW STATE GET MORE BENEFITS FROM THE FEDERAL GOVERNMENT THAN THE OTHER STATES?

The following are a few key examples of federal government benefits to states, the federal presence in states and how the current District of Columbia fares relative to its 50 fully-enfranchised state counterparts.

Payments in Lieu of Taxes

When the U.S. government owns property, it holds no tax obligation to the states that host it. To compensate for foregone revenues, the federal government disburses Payments in Lieu of Taxes (PILT) to individual states on an annual basis.

In Fiscal Year 2014, the federal government paid out more than $402.3 million in PILT allocations, of which the District of Columbia received $18,159. By comparison, California, Utah, and New Mexico brought in over $45.2 million, $35.3 million, and $34.6 million in payments in lieu of taxes, respectively, during the same period.

The Department of the Interior subsidizes state governments to develop natural resource extraction infrastructure. The Office of Natural Resource Revenue reports that in Fiscal Year 2014, the District of Columbia received no disbursements. In contrast, they report payments of more than $1 billion to Wyoming, $579 million to New Mexico, and $170 million to Utah.

Despite the small size of the District of Columbia, the percentage of land area owned by the federal government is less than that of eight states. About 21 percent falls under federal control, compared to 81 percent of Nevada and 62 percent of Idaho.

Notably, by establishing a new state and creating a smaller federal enclave, the new state would have even fewer acres under federal control.

At last Census collection, the District was home to about 60,000 federal employees - roughly 1.5 percent of the nation’s civil service.

In contrast, there were 344,674 federal employees in California; 322,423 in Virginia; and 283,453 in Texas. The size of the federal workforce is over 570 percent, 530 percent, and 470 percent greater, respectively, in California, Virginia, and Texas than it is in The District of Columbia.

IS THE DISTRICT'S LOCAL GOVERNMENT RESPONSIBLE ENOUGH TO BECOME A STATE?

For two decades, the local District government has maintained a balanced budget. And a $1.75 billion reserve fund.

A peculiarity of the current District of Columbia is that the Congress must review the local and federal budget every year. For more than 16 consecutive years, the national legislature has failed to approve the District’s expenditure plans in the anticipated time frame, restricting city funds and needlessly delaying program implementation, often for months at a time.